The 2014 United States Latte Art Championship went down last weekend during the SCAA Event, and Sprudge was there to cover the action as Official Media Partners. This was the first-ever US Latte Art Championship event, hosted by our friends and partners at Dalla Corte, whose DC Pro espresso machine anchors this competition.

Here’s the first round standings from USLAC, which also serves as an intro the entire field of competitors.

The inaugural United States Latte Art Championship had fifteen competitors in total and announced six finalists on Friday. Three represent the West Coast, one represents Hawaii, and two represent the Midwest. Sprudge.com was throughout finals to photograph the top six as they poured three sets of designs for a jury of international latte art experts.

“We’re making history,” said Row Aczon of Honolulu Coffee Roasters after his finals routine. Dean Kallivrousis of Onyx Coffee Lab said, “I’m so glad that the US will finally have an ambassador that’ll be represented at the world stage.”

Here’s a rundown of the top 6 competitors and their marvelous pours. 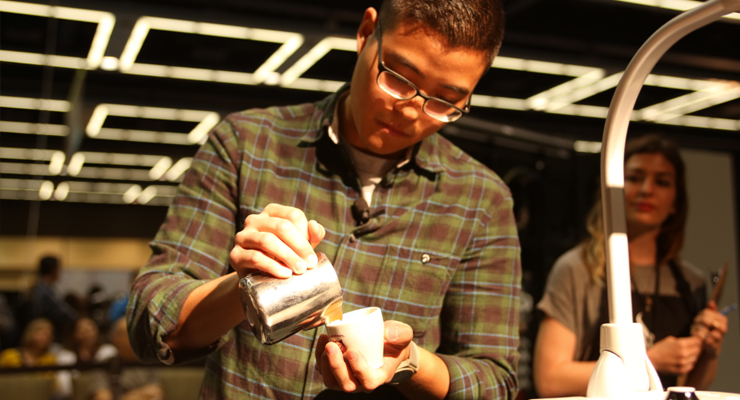 Simeon Bricker of The Roasterie now moves on to represent the United States of America at the 2014 World Latte Art Championship in Melbourne, happening in just two short weeks as part of the Melbourne International Coffee Expo. Sprudge.com will be there covering the action live from MICE in partnership with Dalla Corte and World Coffee Events.