Welcome to our recap coverage of the 2014 Big Eastern Regional Barista Competition. It is our pleasure and privilege to serve as official media sponsors throughout the 2014 United States Barista Championship season, in association with the Specialty Coffee Association of America.

This coverage is made possible by direct support from Dallis Bros. Coffee and Counter Culture Coffee. The entirety of our 2014 competition coverage – regional, nationals, and the 2014 World Barista Championship – is anchored by the direct support of Nuova Simonelli, whose Aurelia T3 serves as the official espresso machine of the USBC and WBC.

Enjoy this short film produced in partnership with Sprudge by Prima Coffee.

All photos by Charlie Burt for Sprudge.com. All notes culled via our @SprudgeLive Twitter coverage – follow @SprudgeLive for the very best in competition coverage, all season long, leading up to the 2014 World Barista Championship in Rimini, Italy. Mr. Cochran competes using a Kenyan coffee from the Kirinyaga region, a coffee that has “dried red fruit and exotic spices” as espresso.

His cappuccinos are made out of water buffalo milk. Here is what a water buffalo looks like. Now someone from Buddy Brew is handing us a cup full of the stuff. It’s surprisingly thin, with just a little bit of the barnyard hint that you’d expect – it mostly tastes like vanilla. And for the record, we 100% encourage more people to have their crews bring us stuff to try during routines.

Unfortunately, Mr. Cochran exceeded his 16 minute time limit, and was subsequently disqualified. He is the 7th DQ of the weekend (!) here at Big Eastern. She calls time at 15 flat, making this yet another impressive and professional routine from a first-time competitor here at Big Eastern. As a cappuccino, this coffee meets @Stonyfield organic milk and tastes like  “orange zest, cinnamon, and caramel.”

Mr. Reilly’s signature drink is Tiki-themed (the Everyman crew did run a Tiki coffee bar, after all), and it includes oligosaccharide syrup, which in addition to being defined as “extracted oils from lime rind, muddled with sugar” is also the most difficult word I had to spell all weekend. “I feel very comfortable admitting that there’s a lot of things I don’t know about coffee.” – Mark Hundley. Strawberry spheres with lemon verbena and a vessel switch for her espressos in Tamara Vigil’s sig drink. She’s a cool customer – so pleasantly in control, it feels like she’s genuinely hosting the judges. Ms. Stewart of @true_volta competes using @TobysBrooklyn Ethiopia Korate – learn more here. She tells the judges, “What initially drew me to this espresso is that the crema was so lucious and smooth.” Later she’s on about Korate’s “apricot sweetness & blackberry acidity.”

“I believe it’s the maturation of a barista that really comes together in a cappuccino” – hey don’t sleep on Kelsie Stewart you guys, this is a really good routine.

Ms. Stewart’s sig drink includes Tupelo honey harvested by her father in 1977, along with hot water and Florida orange juice, which are together transformed into a foam on stage, and used to top her espressos.

Unfortunately, Ms. Stewart exceeded her 16 minute time limit, and was subsequently disqualified. She becomes the 8h (!!) and final DQ of the weekend here at Big Eastern. 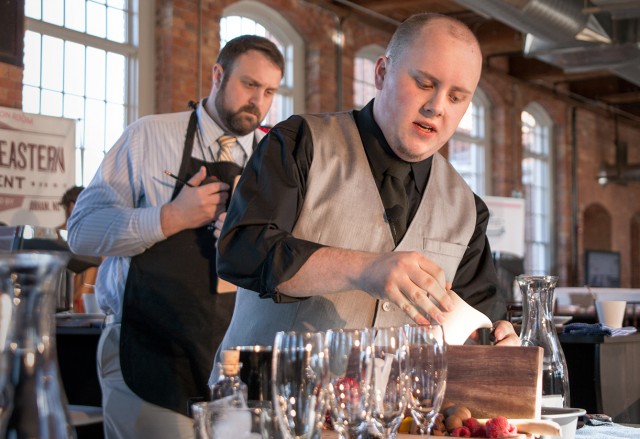 “We are in the business of experiences.” – Tim Jones.

“Just a hint of cherry, some cocoa, and a subtle nougat” in @timmjones‘ cappuccinos, moving into pomegranate molasses, tamarind paste, room temp espresso and quinine water in his signature drinks. In a nice bit of suggested synergy, Mr. Jones puts together his signature drinks to the tune of The Beatles’ “Come Together”.

Mr. Jones calls time at 14:55, and is yet another highly impressive first-time competitor here at Big Eastern. Mr. Search was originally scheduled to compete on Saturday afternoon, during Day Two, and he did in fact do a full performance yesterday. However, there was an undeclared judging conflict during Mr. Search’s routine, and he was offered the opportunity to compete again on Sunday because of this. Mr. Search chose to voluntarily perform again, and thus became our final competitor of Big Eastern.

There is an old school confidence in Philip Search’s competitions style – he’s been here before, having won the Northeast region in 2011.

Mr. Search asks the judges to transfer their espressos to a separate vessel after first evaluating visually – this vessel transfer has been a major trend all weekend at Big Eastern.

Mr. Search’s blend is comprised of Ethiopia Yukro and Guatemala Finca Los Caballitos – Mr. Search runs the “single origin” program at La Colombe, and his espresso blend is taken from that program. It’s got “tannic flavors, with some grape skins.”

Sig drink includes a C02 charge – also kind of a gambit, because CO2 charges overflow all the time, or don’t work, or need to be replaced, etc etc. Today his use of CO2 goes just fine, but it’s always a nerve-wracking moment. Damn us all, we humans, for loving bubbly beverages so much.

Enjoy all of our 2014 Big Eastern coverage here.