Charles Babinski, co-owner of G&B Coffee and Go Get Em Tiger in Los Angeles, has won the 2015 United States Barista Championship. Held over the past three days in the Long Beach, California, the 2015 USBC whittled down 36 of the very best baristas in the United States down to 18, then six, and finally, one. This is Charles Babinski’s first career US Barista Championship win, following three consecutive second place finishes at the event, and it makes for one hell of an enviable trophy case at Go Get Em / G&B (Mr. Babinski’s business partner, Kyle Glanville, was the US national champion in 2008). 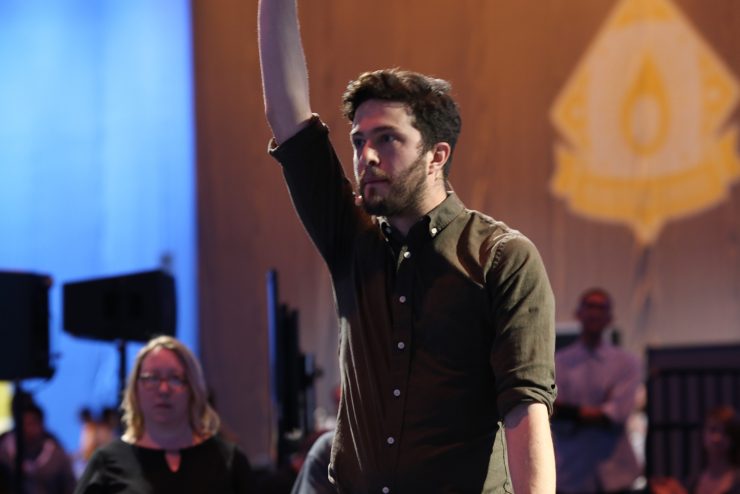 Mr. Babinski’s routine made use of a coffee called Honduras Ocotillo, roasted by 49th Parallel in Vancouver, British Colombia, as well as an Ethiopian coffee roasted by Heart Coffee Roasters of Portland, Oregon. His signature beverage combined pine tree honey, juniper syrup, and a grapefruit reduction, blended together live on stage with Honduran espresso. It’s often rare in the tight knit, cloistered world of competitive coffee for consensus to emerge following a weekend of competition. But this year that seems to be exactly what’s happened, as Charles Babinski is a widely beloved and respected feature in that community, even as his shops cater to an ever-growing customer base of mainstream coffee lovers. At the top level of any competition, nobody likes to lose, but in conversations following this year’s USBC event several finalists expressed the sentiment that losing to Charles Babinski was a sort of honor. You don’t hear stuff like that most years. Congratulations to Charles Babinski, his team and tight knit group of supporters, and the city of Los Angeles. Mr. Babinski returns to the stage this April in Seattle, Washington for the 2015 World Barista Championship. Want photos from our treasure trove of USBC coverage? Email us.

Zac Cadwalader contributed to this reporting.